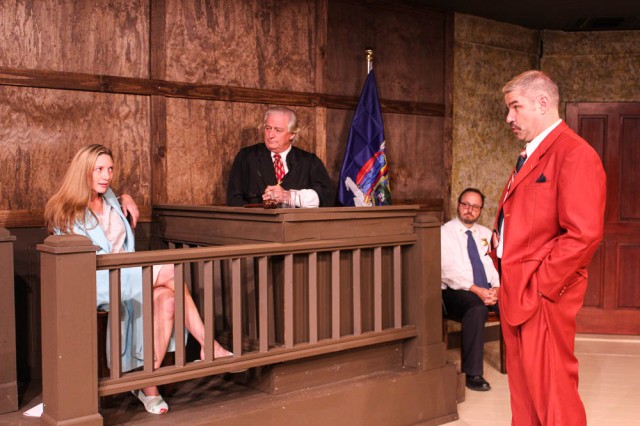 There’s a great story in the program of how the play Nuts took Santa Rosa by storm in 1983 when presented by the new Actors Theatre in a downtown storefront. It’s a warm tale of a populace hungry for meaningful art, rewarding a fledgling theatre company with sold-out performances and acclaim. Left Edge Theatre, the later stepchild of that same group, chose to revive Nuts, defying their own rules to share a play about rules-breaking, fitting in the context of their current season.

In a nutshell, Claudia Draper (in a terrific performance by Heather Gordon) must prove she is sane enough to stand trial for the charge of manslaughter, having been committed to Bellevue mental hospital by her parents and the State of New York. In this somewhat informal hearing, she’s guilty of insanity until she proves otherwise, in hopes of getting to a trial where she’ll be innocent until proven guilty. Aided by defense attorney Aaron Levinsky (disarmingly low-key and cunning David Yen), whom she doesn’t necessarily trust, she churns her defiant, in-your-face way through the hearing, desperate to keep power over her own life. …

To continue reading about this production, see the full review at Sonoma County Gazette:
Nuts